Frasierquest 1.13: Guess Who's Coming to Breakfast? 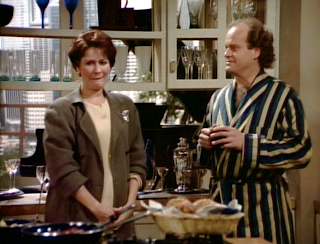 Frasier: Now listen Niles, I’m having a young lady over on Friday night, I was hoping you could take Dad out for me.

Frasier: Why, you have plans Friday?

Niles: No, I have plans Saturday.

Some episodes are harder to write about than others, and “Guess Who’s Coming to Breakfast” has been a tough one for some reason. It’s not a weak episode, per se, but I find it less memorable than the ones surrounding it. Still, after a few episodes it’s good to get back to the dynamic between Frasier and Martin, and a thin “A” plot is surrounded by lots of extraneous funny business to sustain our interest. It’s also a Hell of a lot lighter than the episodes which came before it, focusing on sex, the generation gap, English breakfasts, and other frivolities.

After Frasier persuades Martin to clear out on Friday night so he can have a date over, Martin asks that Frasier do the same on Saturday. He’s meeting with Elaine Morris (Linda Stephens) from 1412, and that date goes unexpectedly well, leading to Elaine popping up at breakfast on Sunday morning. Frasier is flustered and embarassed, but gets over his awkwardness at realizing his dad still has a sex life, and goes on to use the experience as an example to one of his callers. He names names, which infuriates Martin no end and scares off Elaine, which forces Frasier to go public again in an attempt to reunite the two.

I suppose the major problem I have when it comes to this episode is that Frasier acts even more foolishly than usual, and it’s not entirely clear why. He doesn’t have a surfeit of common sense, but he isn’t totally absent-minded either, and I think just about anyone should realize that not only discussing your father’s sex life on the radio but naming names is crossing a line, and it’s not even necessary in order for Frasier to make the point to the caller. He could simply say that his dad is dating again and this has once caused complication the next morning.

Then again, he wouldn’t be the first person to dole out too much information to people he think wouldn’t care, and of course Frasier also spent a long time before this in private practice. Sure, psychiatric patients aren’t bound by confidentiality, but it’s still unlikely that any one thing said in the office will spread too far. And he’s alone with his producer in that booth, and the idea that one of the people on the other end of that conversation may in fact be Martin or Elaine maybe just didn’t sink in.

In any case, this is one of those episodes where I can’t help but feel the embarassment the characters go through a little, and these episodes are sometimes hard to watch. That said, Frasier goes a long way towards redeeming himself with his efforts to get Elaine talking to Martin again, and the last couple of scenes are quite sweet on that level.

I’d actually forgotten that this is the episode which introduces Noel Shempsky (Patrick Kerr), KACL’s resident dweeb. Noel is a series fixture, with the show from start to finish, and he never actually changed that much from his first appearance. He’s always kind of sweet but kind of creepy, and though it’s not the most three-dimensional of characterizations, Kerr gives it a life beyond the stereotype. (The frequent jokes at the expense of his STAR TREK fixation are something of an in-joke- this is, after all, a Paramount series, and Kelsey Grammer once had a prominent guest shot on THE NEXT GENERATION as the ill-fated captain of a past Enterprise.) And as we see here, his sensors are locked on Roz, something which will not change for some time. It says something that Roz is at least willing to give him a chance, thinking it might be fun to date a guy with substance for once, but it’s just not meant to be.

The episode reaches its comic peak early with Frasier’s glorious awkwardness at breakfast with Elaine; quoting it would do no good since it’s all in the delivery. (That Daphne made bangers for breakfast does not help matters.) But the climactic scene, where Frasier has to fend off a crowd of drama-hungry tenants (and the doorman) in order to get Elaine and Martin talking, is also clever, and reminiscient of an early moment from Sam and Diane’s courtship in CHEERS. I also suspect the scene is partly a parody of how devoted fans can get to these ongoing love stories, even though this show’s most famous romantic arc is still in its infancy. (More on that as it develops.)

Again, this is a solid episode, and though Frasier seems to go out of his way to put his foot in it, it won’t be the last time. (I’m not even sure it’s the first.) In any case, one at least hopes he won’t make this specific mistake again. The moral of the story is, do not kiss and tell vicariously. At least not on city-wide radio.

Daphne: The way you were carrying on, I think we can be thankful I didn’t make Toad in the Hole!