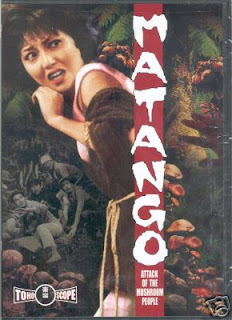 Matango has long been a picture that intrigued me, ever since I first saw bootleg videotapes labelled "Attack of the Mushroom People" being sold at a convention. The movie didn't get much circulation in America until its 2005 DVD release, and it's too weird to easily fall into familiar niches- it's not quite a kaiju picture, nor a straight horror film. Instead it's a weird fable about dehumanization and conformity that articulates its metaphor through the central image of people turning into fungus. In some ways it straddles the line between Toho's conventional movies and the more surreal Japanese art films that began to flourish in this decade and afterwards, and it's a response to the same anxiety about rapid social change and technological progress. It's also an effectively creepy and atmospheric little picture that, if it drags a little, still has a Hell of a payoff.

Passengers on board a yacht are caught up in the midst of a huge storm. The lost and crippled ship limps its way to a mysterious and desolate island, where the survivors find another abandoned boat washed up on shore and decide to use it for shelter. The ship is a scientific vessel making a study of the area after it was exposed to radiation from atomic testing, which killed off most of the wildlife but had beneficial effects on a local species of mushroom dubbed matango. Despite hints in the ship's logs that the mushrooms might not be entirely healthy, one by one the survivors try them, and find themselves slowly mutating, and forming a kind of cabal focused on getting the others to join them.

Much like Invasion of the Body Snatchers, the film deals with the pressure to conform and join the mindless crowd, but places the story in a slightly different context. Instead of the deliberate and mechanistic takeover of society by a poisonous force, we have people driven to behaving like a mindless herd out of fear and desperation. There's a real intensity to the film's sweaty island visuals and the plot's constant hammering on basic issues of supplies and survival, which gives way to violence between the castaways even before some of them start turning into fungus. Indeed their transformation into inhuman monsters seems almost inevitable, the logical endpoint of a downward spiral of inhuman behavior.

Granted, that doesn't stop the whole business of people turning into mushrooms from being weird as shit. Honda seems to get that there's a certain comic quality to the concept of a human mushroom, and with the exception of an excellent early scene, treats them less as monsters than as a strange force that's unsettling simply because of how wrong it feels. Horror that plays off our sense of incongruity rather than the overt threat of death or torture is rare because it's tough to pull off, but Matango's approach is interesting.

While the human drama is linked to the central metaphor, there's definitely a sense that it drags longer than it should. The pacing is deliberate, and while I can see the need for it, the tension doesn't quite build as it should- the film engages us in the situation but doesn't do the best job building from it. There's something odd in people's casual acceptance of the idea that eating the mushrooms turns you into fungus yourself, the sort of thing you'd think the characters might need to see to believe, but it does make the story clear early on.

Despite its pedigree and the fact that it's known as "Attack of the Mushroom People", Matango shouldn't be approached as a monster movie. it's not trying to work on that level and expecting it will only lead to disappointment. Instead it's a fascinating mood piece, slow and even slack at times, but powerful nonetheless. It's a strong departure from the Toho genre formula, and an interesting parable for an age of rapid social change.

Good choice, I'm quite fond of this movie as well...